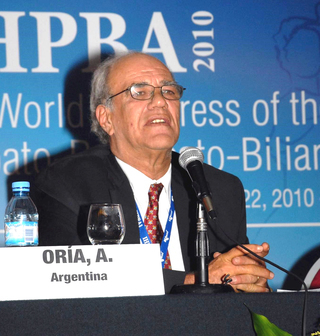 It is with sadness that IHPBA marks the passing of Professor Alejandro Oria on 17th November 2014.  Professor Oria was held in great esteem by all who knew him, both professionally and on a personal level.  An outstanding scientist, educator and surgeon, he was a true pioneer in his field.  During his career he was Head Professor of Surgery (HPB) and Chief of Surgery at Cosme Argerich Hospital, Buenos Aires, Argentina; Honorary Professor of the Argentine College of Surgery; and an Honorary member of the Argentine Association of Surgeons. Our condolences are with his family, friends and colleagues.