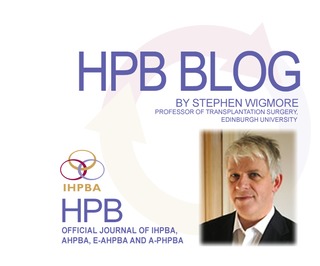 As we approach the end of the year many IHPBA members will be looking forward to having a well earned rest. So what better to complete the picture than putting your feet up with the December issue of HPB!

This issue has quite a benign disease theme and begins with a survey of the E-AHPBA membership on management practices for common bile duct stones, from Vannijvel and colleagues based in European centres. They found that MRCP was the preferred test for diagnosis of CBD stones and that there remains a heavy reliance on ERCP with only 12% of surgeons favouring a laparoscopic CBD exploration as an initial strategy.  The case volume for LCBDE remains low with only 30% of centres performing more than 10 cases each year. They conclude that there is still considerable variation between centres in terms of indication and practice of LCBDE in Europe and Africa.

Following on the benign theme a study by Rystedt and Montgomery from Lund Sweden investigated quality of life after bile duct injury using the Swedish Gallriks registry data. They matched patients with bile duct injury to two controls each including for the procedure conversion. They found that if bile duct injury was detected early then quality of life was as good as the control group but delayed detection of injury resulted in worse quality of life. They argue that early diagnosis and liberal use of intraoperative cholangiography is crucial in this group.

Pyogenic liver abscess is the focus of a study from Buenos Aires, Argentina. This is an interesting study which highlights the high proportion of patients with pore-existing biliary disease or immunosuppression after liver transplantation as risk factors for abscess development. Abscesses were most difficult to treat and more likely to recur in the presence of cholangitis or if there were multiresistant organisms grown.

Two studies focus on training in North America. The first from Dallas looked at the perception of general surgery trainees of HPB procedures and training. They found most general surgery residents would feel uncomfortable undertaking a complex HPB procedure and they felt that AHPBA accredited fellowships were suitable for advanced HPB training. The second study looked specifically at the influence of formal fellowship training in North America on the practice of pancreaticoduodenectomy. This study found that HPB fellowship trainees were more likely to have had a higher practice, used more technical innovations and were more equipped to minimize the risk of pancreatic fistula than trainees who had come through a more general surgical oncology fellowship.

The December issue also features a detailed analysis of the venous drainage patterns and territories from Norihiro’s group based in Tokyo Japan. This is essential reading for those involved in living donor transplantation or complex liver resections. On the theme of complex surgery, a study from Toronto looked at the effect of the antifibrinolytic tranexamic acid on thromboelastography in patients undergoing major liver resections. They found rapid attainment of therapeutic levels of tranexamic acid but no effect on thromboelastography and no evidence of fibrinolysis in either treated patients or controls. This was a small phase 2 study and so was not powered to detect clinical outcome differences. Further articles in this issue of HPB look at the effect of type of pancreatic reconstruction after pancreaticoduodenectomy on pancreatic exocrine insufficiency, the value of carcinoembryonic antigen in surgery for colorectal liver metastases and glutathione species and the metabolome in diagnosis of hepatocellular carcinoma.

All of the team at HPB thank our authors, reviewers and editorial board for their contributions over the past year. We wish you a happy and restful festive period and a productive and successful New Year.