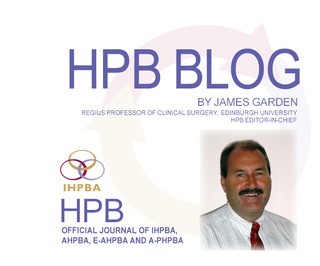 Is this the beginning of the end – for me it is?

Incredible, but January 2018 is already here when it seems like only yesterday that I officially took over the reins of HPB as Editor-in-Chief some nine years ago. This year will see a transition to a new Editor-in-Chief and I am sure that the Journal will go on to greater things and benefit from the injection of new blood. We have come a long way and I want to start by giving credit to my excellent editorial colleagues whose charitable commitment to our cause has been above and beyond the cause of duty. This issue is also a tribute to those who have supported the Journal through manuscript submission and review. It encapsulates the transformation from a somewhat ‘homely’ publication to a hard-nosed high impact specialist journal that can now compete against the traditional big surgical guns.

Just look at the content in this issue! We have a thoughtful leader from Anya Adair making the case for considering bariatric surgery for obese patients undergoing liver transplantation. We had been waiting for a some time for the ‘case against’ and I have hesitated to name and shame the defaulter but Anya’s article is a very balanced view that will cause us to reflect on a particular challenge.  I apologise that it has taken time to find a home for this in this January issue. The article by Petrucciani and colleagues provides an extensive evidence base highlighting the specific role of completion pancreatectomy in the management of pancreatic fistula following pancreaticoduodenectomy. It is clear that the procedure is challenging and carries not inconsiderable risk when required. Gavriilidis et al provide us with a further systematic review which indicates that simultaneous colorectal resection and hepatectomy is better than delayed hepatectomy for synchronous colorectal liver metastases. Of course much of the evidence is based on studies where this approach has been used selectively but this article is a good read for the liver resectionist!

What about the pancreatic surgeon? Bressan and colleagues have reviewed the literature to establish the role of completion pancreatectomy in the management of post Whipple’s fistula management. This approach is clearly high risk even when used selectively but this is almost certainly a reflection of the challenging situation that is faced with this complex morbidity. We also have something for the dedicated pathologist and the article by Nakanishi et al looks in considerable detail at cystic duct centred advanced biliary malignancy. This issue comes up with the technical challenges too, and June Peng and her colleagues at the Cleveland Clinic provide an interesting article on a situation that is likely to be an increasing challenge for the pancreatic surgeon. I would read this one so that you are well prepared when managing peripancreatic pathology in the post- gastric bypass patient.

I accept that some might find the analysis by Abdel-Rahman a little dry but it is important that HPB addresses basic issues on tumour staging. I liked the fact that the 8th AJCC stage grouping for HCC is better than the 7th but amused that we probably already need a 9th! We can always rely on our Japanese colleagues to bring something new on technical aspects of HPB surgery. Nakayama et al focus on the potential relevance of the pancreaticoduodenal arcade on the impact on the complexity of the major pancreatic resection. Okuno and the MD Anderson team focus on the issue of diaphragmatic invasion by colorectal liver metastases. The value of extensive data collection is emphasised and allows us to focus on a small subset of patients whose outcome is clearly compromised by this presentation. I worry at times that we can sometimes get too focused on statistical significances but I did like the article on liver haemangioma from Liu and colleagues from Beijing. I think this large series does have a message in our considering age when tempted to intervene on this condition. Chen and the group from Ottowa have looked at the literature extensively and come to the conclusion that we do need to use the ISGPF definition or else we are in the minority when talking about pancreatic fistula. Benhaim et al analysed a group of patients subjected to ablative therapy and come to the conclusion that larger colorectal liver tumour lesions that are downsized by neo-adjuvant chemotherapy do not do well with radiofrequency ablation. Vugt and colleagues in the Netherlands use a large Dutch database to show that involvement of the artery matters more than the portal vein in perihilar cholangiocarcinoma.  Finally, Kobayashi and colleagues have found a technique that might replace the surgeon’s hand, albeit only in using elastography as a substitute for the hand during laparoscopic hepatectomy.

So who would have guessed how much the content of HPB would have moved on in the last decade? I am just pleased to have been able to take the ride with my editorial colleagues.