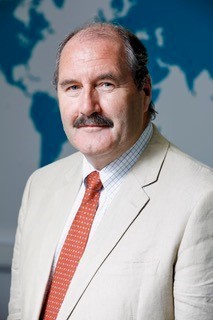 Professor Garden is Regius Professor of Clinical Surgery, Director of Edinburgh Surgery Online, Dean International and past Head of the  School of Clinical Sciences and Community Health at the University of  Edinburgh.  He trained in Glasgow, Edinburgh and Paris in hepatobiliary, pancreatic and liver transplantation surgery.  He is considered one of the preeminent specialists in HPB and transplantation surgery and led the establishment of the Scottish Liver Transplantation Unit and performed the first successful liver transplant in Scotland in 1992.

James Garden has had a long association with the IHPBA.  He organized a very successful World Congress in Edinburgh in 2006 and was IHPBA President from 2012 – 2014.  His dedication to IHPBA has been demonstrated in numerous ways but one significant responsibility for which his contribution will be remembered is his extremely successful ten year tenure as Editor-in-Chief of HPB.  During this period, he has taken HPB from being a journal that many researchers in the field never considered as an option for publication, to one of the higher impact factor journals publishing in the field.  His hugely professional approach and innovative thinking ensured that the journal is recognised as an important platform for excellent research in HPB surgery.  He encouraged submissions after regional and international congresses, and this together with profit sharing that recognised the contribution of each region, ensured a greater number of submissions and therefore that better research was submitted for publication.

In 2007, Professor Garden led the development of an innovative series of surgical online learning programmes at the University of Edinburgh with the Royal College of Surgeons, Edinburgh, securing the Queen’s Anniversary Prize for Higher and Further Education in 2013.  The programmes recruited over 300 trainees in 2017 and currently provide academic training for some 500 trainees in over 60 countries.  He is Honorary Secretary and Vice-President of the James IV Association of Surgeons and Chairman of the BJS Society Ltd.  He holds honorary membership of a number of surgical organisations including the American Surgical Association.  He has honorary fellowships of the Colleges of Surgeons in Australasia, Canada, Hong Kong, America, England and Ireland.  He is Surgeon to the Queen in Scotland, is a Fellow of the Royal Society of Edinburgh and was made Commander of the British Empire in 2014.

Professor Garden has made an invaluable contribution throughout his career to both IHPBA and to HPB surgery as a whole, and IHPBA is delighted to award him the 2018 IHPBA Distinguished Service Medal.  The award was presented during the 13th IHPBA World Congress in Geneva, September 2018.