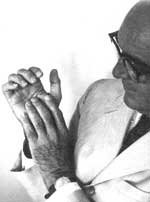 "I have concentrated my energy and my efforts toward my primary professional goal and responsibility: to get sick people well, and when that has proven impossible, to add to their comfort, their continued sense of belonging and the knowledge that we would travel this road together."

Doctor Kenneth Wayne Warren, internationally recognized as an authority on diseases of the pancreas, liver and biliary tract died at age 90, November 15th, 2001 at the Boston New England Baptist Hospital, Massachusetts, in the United States after an extended illness with prostate cancer. Thus ended an illustrious surgical career that spanned over 60 years.Kenneth Warren was the son of Dr. George and Judy Warren whose earliest ancestors arrived at the Jamestown, Virginia colony around 1625 on American soil. After the Revolutionary War, they moved west to South Carolina and then settled in Cairo, Tennessee by 1796. By 1830, they were in Wayne County, Illinois where his father was born in 1877.

Kenneth Warren was born July 16th, 1911 in Cartersville, Georgia and spent a few of his early years in that North Georgia city. Later, the family moved to Perry, Florida and Kenneth received his elementary and high school education in that area. In 1930 he enrolled in Harvard College and graduated in 1934. He obtained his M.D. degree from Temple University School of Medicine in 1938. He then entered and completed a six-year programme of surgical residency training at the Henry Ford Hospital in Detroit, Michigan under Dr. Roy D. McClure. It was there that Dr. Warren first showed a profound interest in surgical diseases of the pancreas, bile ducts, and liver; areas in which he would later make outstanding contributions.Upon completing his residency training in 1945, Dr. Warren joined the staff of the Lahey Clinic. There he developed a close and professional relationship with such world-renowned surgeons as Drs. Frank F. Lahey, Richard B. Cattell, and Samuel R. Marshall. Each of these mentors was an outstanding member of the Southern Surgical Association.Dr. Warren rose to become Department Chairman of General Surgery at the Lahey Clinic and Chief of Surgery at the New England Baptist Hospital. He later became chief consultant in surgery at the Lahey Clinic Foundation. He took intense pride in teaching surgical residents, lecturing at the Harvard Medical School and took an even greater pride in that many of his former residents later performed complex surgical procedures all over the world.

Dr. Warren's main surgical interests were in correcting complex biliary tract problems and in performing operations for pancreatic and periampullary cancer. He began his work when complex pancreatic surgery was in its infancy and made many technical improvements in the operation of pancreatico-duodenectomy. He had a vast experience with the latter operation and patients were referred to him from all over the world. It was a joy to hear him discuss these problems at national surgical meetings and he would frequently state in his modest manner that complex pancreatic surgery should be performed in a high volume center in order to keep mortality and morbidity at a minimum. In one national surgical meeting, he modestly stated that he had performed 147 consecutive pancreaticoduodenectomies without a mortality.

During his active years, Dr. Warren wrote over 250 scientific surgical articles, which were published in major surgical journals. In addition, he published two surgical texts. He was a visiting professor in most of the major medical centers in this country and abroad. In addition to being a frequent lecturer, he was a member of more than 20 national and international professional and medical societies. Furthermore, he was in many societies an honorary member. He cherished his membership in the recently found Pancreatic Society of Great Britain and Ireland. He was also extremely proud of the fact that he received the Louis Pasteur Medallion at the surgical seminar in Strasbourg, France. He was a trustee of the New England Baptist Hospital, New England Deaconess Hospital and the Lahey Clinic. He received the alumni award in three categories from Temple University. After retiring from the Lahey Clinic at the mandatory age of 65, he moved his offices to the New England Baptist Hospital and continued an active surgical practice for the next 14 years. In 1989, he terminated his operative practice and confined his efforts to surgical consulting, lecturing, teaching, and administrative duties. These duties he performed with his usual enthusiasm and vigour until near the very end of his life.

"Surgery is not difficult, nor scary, it is FUN."

Dr. Warren was extremely close to many of his patients. It is remarkable that he remembered many details about their illnesses long after he had operated upon them. He had a great personal concern for each of his patients. A memorable event occurred in Kenneth Warren's life just a few days before his death in the New England Baptist Hospital. A Warren Fund for hepato-pancreato-biliary research had been established in his honour and the first recipient was a young lady from Holland, Dr. Tjarda van Heek, who visited Dr. Warren in his hospital room. This interview meant a great deal to him.

Dr. Kenneth Warren, aside from his surgical interests, was an avid golfer and a great student of literature. He led a full life consisting of operating upon complex problems, teaching, lecturing, and engagement in clinical research.

Dr. Kenneth Warren will always be remembered as a devoted husband and father; a master surgeon; and a spirited, likeable individual. His colleagues called Dr. Warren "the complete surgeon" since he combined a high degree of professional skill with personal concern for each patient. To his many peers, he will be remembered as one of the outstanding pancreatic surgeons of the 20th century.

"Every surgeon should read Franklin Dexter's Anatomy of the Peritoneum, 1892. This book can be read in one evening. I want you to read it several times to appreciate the lesson"

"young surgeons like you will open the doors of the future to the elders. Be sceptical, you should remember the immortal words of Alexander Pope: Be not the first by whom the new is tried, nor yet the last to lay the old aside."

In Memory of Dr. Kenneth Wayne Warren - the IHPBA is grateful to his life-long contributions and his generous bequest to the Warren Surgical Research Fellowship.

To find out more about Alberto Burri who took the photograph above, click here