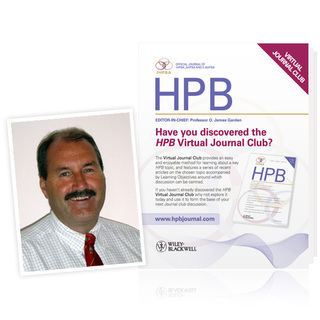 ISI Thomson has now announced the 2012 impact factor for HPB of 1.939. Since the award of its first impact factor two years ago, HPB has steadily climbed the surgical journal rankings to 62 of the 198 journals in the specialty journals in Surgery and 47 of 74 in Gastroenterology and Hepatology. The increase in the last 12 months from 1.606 to 1.939 is again the greatest rise of any surgical journal this year and closes the gap considerably on many of the journals that might be considered as our competitors.

I am a little disappointed that we have not reached the target that I set myself of an impact factor of 2 by the end of my five-year term as Editor-in-Chief. However, the impact factor is based on the number of citations of manuscripts published in the journal during 2010 and 2011 and I predict that we will shoot past my target next year! I would like to pay tribute to the editorial team, the editorial board and to our reviewers for supporting our Journal and ensuring its quality content. We have benefited greatly from the mandatory submission policy of the AHPBA and will continue to work with regional associations to provide an efficient service for publishing congress abstracts and processing manuscripts through the peer review process.

Colleagues should be aware that the volume of submitted manuscripts continues to rise and will understand that there will inevitably be an increased rejection rate as a consequence. We have tried to accommodate the surge in quality manuscripts during this year by increasing page numbers and our new proposed contract with our publishers, Wiley Blackwell, will allow us to include as many quality submissions as possible. Despite this, it is unlikely that the acceptance rate will rise much above 30% in the coming year.

Next year will see a move to an improved online version of the Journal and access to it will be improved by the myHPB educational platform linked to the IHPBA website. I would value your feedback and have started a discussion board on myHPB - http://www.myhpb.org