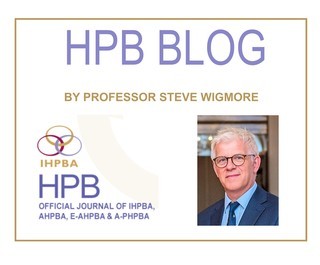 The July edition of HPB features some really important papers that we hope will attract a lot of interest and be cited in the future. Leading off are Andrea Frilling and colleagues from London with their paper on Y90  as a liver directed therapy for neuroendocrine metastases. They show excellent safety profiles and encouraging response rates creating a clear imperative for future clinical trials against other competing therapies. Zhou and colleagues from Guandong China present a meta analysis to explore the question of whether patients who undergo liver resection for intrahepatic cholangiocarcinoma should also undergo lymphadenectomy. Pooled data suggests lymphadenectomy increases morbidity without any effect on survival.

A further meta analysis was undertaken by Adiamah and colleagues from Nottingham, UK comparing outcomes of patients undergoing pancreaticoduodenectomy who were randomized to receive either enteral nutrition or parenteral nutrition. There was no difference in the primary outcome measure of delayed gastric emptying but length of stay was shorter in the enteral nutrition group. Staying on the pancreas theme Ramanathan and colleagues from Richmond and Pittsburgh USA report outcomes of elderly patients undergoing distal pancreatectomy for cystic neoplasms or pNETs and show a disproportionate clustering of complications in the patients in their 70’s and 80’s suggesting careful counseling is required in this group. Li and colleagues from Chengdu and Guangzhou, China have undertaken a meta analysis looking at the value of the hanging manouevre in olpen liver resection. The hanging manouevre was associated with lower blood loss, transfusion rate, transection time, overall complications shorter hospital stay and better overall survival. The studies were predominantly Asian with only two from Europe probably reflecting the practice and so it will be interesting to see whether the hanging manouevre becomes more widely used outside of Asia.

The Dutch Pancreatitis Group present their analysis of patients who underwent cholecystectomy after mild pancreatitis. They found lower grading of ‘difficult cholecystectomy’ in patients operated during the index admission compared with those in whom cholecystectomy was delayed. This study has prompted some correspondence while out in its published online version and will hopefully provoke more debate through social media. Continuing with the gallbladder, Escartin and colleagues from Llieda, Spain show that the failure to remove the gallbladder during the index admission with acute cholecystitis results in a significant burden of morbidity for the patient, further reinforcing the message to operate early on gallbladder disease.

There is already a literature around low phosphate levels and outcomes for liver surgery but here we publish an intriguing study from Mueller and colleagues from Boston USA showing that low phosphate levels in pancreatic surgery are associated with increased likelihood of pancreatic fistula postoperatively. It would be intriguing to understand the mechanism and whether there is cause or effect or just association and so it will be interesting to see how this story develops. Snyder and colleagues from a number of US centres show that the blood transfusion rate has dropped for patients undergoing portal vein resection during pancreatic resection. The precise explanation is unclear but seems likely an improvement in surgery, anaesthesiology and perhaps a shifting of transfusion threshold trigger points.

Lam and colleageus from Irvine and San Francisco, USA explored the factors affecting outcome for radiofrequency ablation in California. They showed improved survival outcomes in high volume centers and for patients of Asian race. Poor tumour biology and having Government insurance were the key factors associated with worse outcomes. Hilst on behalf of colleagues from the Dutch Pancreatic Cancer Group presents a propensity matched analysis of patients who underwent laparoscopic distal pancreatectomy with open reconstruction (during the learning curve) versus fully laparoscopic distal pancreatectomy. They found no benefit in terms of complication rates or other principal outcome measures for using an open reconstruction indeed the unplanned conversion rate was higher in this group which may have partly because it was a new procedure. In another large study from Amsterdam Netherlands van Roessel and colleagues looked back at outcomes for nearly 1500 patients undergoing pancreas resection and found that in spite of widening indications and acceptability for surgery (in terms of age and comorbidity) there was a successive improvement in outcomes over successive eras.

Tummers and colleagues from Stanford California, present a really interesting paper on their experience using cetuximab-IRDye80 fluorescence to detect lymph node metastases in pancreatic cancer. This is a really elegant proof of concept study that shows that using their technique it is possible to detect sub millimeter metastases from PDAC in lymph nodes and I would encourage everyone to read this.

There are further papers on ALPSS highlighting risk factors for mortality in patients with colorectal liver metastases and a paper looking at a single centre nonrandomized comparison of outcomes between laparoscopic and robotic major hepatectomy.

Eagle-eyed readers will notice that we have reintroduced the correspondence section of the journal.  As an editorial team we are keen to encourage discussion and debate of articles and particularly favour letters which include new data or new ideas. The time lag between on line publication and journal issue publication offers the opportunity for us to publish letters where we can alongside the original article and also garner the opinion of the original authors on the points raised in correspondence. We would encourage readers to keep an eye out for interesting articles online and write to us if you have a strong opinion or data that supports or contradicts a study and we will do our best to air your views.