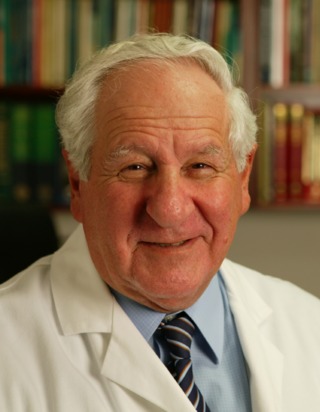 It is with profound sadness that I write to inform the membership that Dr. Leslie H. Blumgart, one of the giants in surgery, has passed away.

Dr. Blumgart was born and initially trained as a dentist in South Africa before moving to England, where he received his medical degree and surgical training in Sheffield and then accepted his first academic position in Cardiff. He rose through the academic ranks in the United Kingdom, while acquiring a national and international reputation for excellence as a Hepatobiliary and Pancreatic Surgeon.  He served as Senior Lecturer and Deputy Director of the University Department of Surgery at the Welsh National Medical School from 1970-72.  He then moved to the Glasgow Royal Infirmary as the St. Mungo Professor of Surgery from 1972-79.  He subsequently served as Director and Honorary Consultant Surgeon for the Department of Surgery at the Royal Hammersmith Hospital in London from 1979-1986.  He was recruited to the University of Bern in Switzerland as Professor and Director of the Department of Visceral and Transplantation Surgery from 1986-1991.  In 1991 he was recruited to Memorial Sloan Kettering Cancer Center as Chief of the Hepatobiliary (now Hepatopancreaticobiliary (HPB)) Service in the Department of Surgery and the holder of the Enid Haupt Chair.

Dr. Blumgart was one of the most influential figures in the evolution of modern approaches to liver, pancreas, and bile duct surgery.  His life’s work took the field from performing surgical resections and reconstructions with frequent complications, massive blood loss and high mortality to a far safer and more effective era.  He also led efforts to advance the multidisciplinary care of cancer patients, improving long-term outcomes through the integration of chemotherapy and radiation therapy with surgery. He authored over 500 papers in peer-reviewed journals, edited 15 books and wrote over 150 book chapters.  He served on the editorial boards of 14 major journals in Surgery, Gastroenterology and Oncology. Dr. Blumgart also created the definitive text on surgery of the liver, biliary tract and pancreas, a work that is now in its 7th edition and bears his name. Over the years, he lectured nationally and internationally, delivering over 200 lectures and orations around the world. He was elected to honorary membership in dozens of surgical associations and received the Lifetime Achievement Award from the European Society of Surgical Oncology in 2014.  Locally he won the Teacher of the Year Award in the Department of Surgery at MSK on multiple occasions (1999, 2005, 2011) and received the MSKCC Distinguished Alumnus Award in 2012. He was elected to Emeritus faculty status at MSKCC in 2021.

It should be noted that Dr. Blumgart was a founding member of the International Biliary Association, a precursor to the current IHPBA, serving the organization as an officer for many years, including as president.  In more recent years, he was honored by the IHPBA as a ‘Living Legend’.

Despite his exceptional and perhaps unequaled contributions to HPB surgery, Dr. Blumgart’s greatest accomplishments (and we believe the ones he would most appreciate being recognized for) have been in educating and training HPB surgeons. Many current leaders in HPB Surgery and Surgical Oncology, as well as Chairs of Departments of Surgery both in the USA and around the world, credit Dr. Blumgart with providing the training and inspiration that have guided their careers.  While carrying out a vigorous practice at MSKCC for over two decades, Dr. Blumgart also generated a video library of complex HPB procedures which he used in facilitating the training of our fellows for many years. In recent years, after he stopped performing clinical surgery himself, his Thursday lectures to our fellows, facilitated by the use of his films, continued to be a high point of our educational program.  Only in the last several years did health issues and the COVID pandemic limit his teaching activities.

Less well known is Les’ great artistic talent, which he pursued well after he retired from clinical practice.  He was a particularly gifted sculptor, producing many magnificent pieces that grace his home.

Known affectionately as “the Professor” by his many trainees, Les Blumgart was a dominant figure in the evolution of HPB Surgery around the world for almost 50 years. Since 1991 he built one of the great HPB clinical and academic programs here at MSKCC and trained a generation of surgical oncologists and HPB surgeons who carry forward his legacy.

He is survived by his wife and best friend of many years, Sarah Blumgart, and his children and grand children.