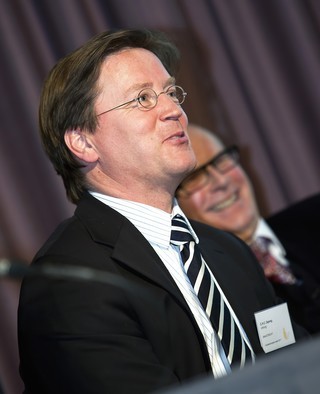 Kees (Cornelius) DeJong served the HPB community in several executive positions for over 10 years. In 2011 he was elected to the EHPBA (soon to become the E-AHPBA) Council.  He was an active council member and in 2015 was elected the Secretary General of the E-AHPBA and served in that position until 2019.

The E-AHPBA underwent significant transformation during that period and Kees was instrumental in guiding much of this change. In 2018 he was elected as the Secretary General-elect of the IHPBA and served in that position until he resigned due to ill health in September 2021. These were challenging years due to the Covid pandemic and his wise council and guidance were essential to the progress made by the organisation during that time.  In 2022 he was awarded an Honorary Membership of the IHPBA in recognition of his contribution to the organisation and to HPB medicine in general.

Kees was a respected member of the leadership of both organisations.  He was a friend to all he worked with and his dedication to the organisations was unyielding.  He will be remembered with fondness by all who knew him and in particular, the younger generation of our membership.  He always had time to talk and share a joke with them, to support them in their careers in many different ways as an excellent clinician, teacher and scientist.

At a personal level Kees became a close friend someone I always turned to when issues in the organisation needed a cool head and wise council.  I will remember him for his quiet dignity and with deep love for a friend lost to us all far to early.  To his family I am grateful that I was allowed the time to work and develop a friendship with Kees.  I am sure he is at peace after several years of significant personal struggle.

Making the patient better was the central motto of Kees Dejong, Professor of Hepato Pancreato Biliary Surgery at the azM/MUMC+. His entire career has been devoted to optimizing the care of the critically ill patient, whose care was entrusted to him. Always keeping an eye on the person behind the patient and looking for solutions when many people saw no way out. 'Make it better' was often Kees' concluding remark when a complex patient case was discussed during the multi-disciplinary meeting.

"Getting better" was unfortunately not an option for the illness he himself had to deal with and which forced him to end his career early. How he would have liked to work to take care of his patients.

Kees was married to Odile, his lover with whom he shared his life since high school. Together they had four children, Giulia, Anne Linde, Kaspar and Job, and three grandchildren.

As a true Maastricht resident, he returned to his native city after studying Medicine in Nijmegen for his PhD research (1993, into metabolic changes in liver failure) and to train as a surgeon. Kees was privileged to have had great teachers in a Master-Gezel position: in the translational research of P. Soeters, W. Buurman and K. Fearon and in the surgery of K. van Duin, OJ Garden and KK Madhavan.

Kees completed his training as a surgeon in 1997. Since 1998 he  worked as a surgeon at Maastricht UMC+. From 1998 to 2000 he also worked as a Senior Lecturer and Consultant Surgeon in the Surgery Department of the Royal Infirmary of Edinburgh, Scotland. In 2008, Kees was appointed Professor of Hepato-Pancreato-Biliary Surgery at MUMC+ and he fulfilled the role of Head of the Division of Gastrointestinal and Oncological Surgery from 2008 to 2018. He was also Vice-President of the Department of Surgery from 2007- 2009.

Kees' clinical focus was mainly on Hepato-Pancreato-Biliary surgery and optimizing perioperative care, including Enhanced Recovery After Surgery (ERAS). He was one of the founders of the ERAS Society and played an important role in setting up laparoscopic liver surgery in the Netherlands.

Kees had a great passion for transferring knowledge. Within the MUMC+ he fulfilled the role of acting trainer for fourteen years and shaped this position with enthusiasm. He was therefore consistently at the top of the annual survey of role models in the department. In recent years he has been increasingly active internationally, where he was the founder of the international HPB Surgeon Exam (UEMS).

His main research interests have been to improve patient clinical outcomes and the role of the gut-liver axis in the disease process. At the start of his career, he received a prestigious Clinical Fellowship from NWO, which enabled him to start his own line of research on liver failure in the period 2001-2006. This was later extended to metabolism and ischemia-reperfusion damage and metabolic disturbances in the gut-liver axis and optimizing the perioperative condition of the patient.

He introduced the ERAS principles in HPB surgery and led a large implementation study in 31 Dutch hospitals. Kees led the Metabolic Laboratory of the Department of Surgery between 2006-2012 (with Prof. Dr. Buurman) and was very active within the research school NUTRIM. As a supervisor, he supervised 32 young scientists and published more than 400 Wi-1 articles.

Kees received (inter)national recognition for his contribution to the clinical and scientific field, including the Glaxo Gastroenterology Prize for best dissertation (1994), the Niels Stensen Stipend (1998), the appointment as Fellow of the Royal College of Surgeons of Edinburgh (ad hominem; 2014), the Frieda den Hartog Jager prize of the Dutch Society for Gastroenterology (2020) and the Honorary Membership of the IHPBA in 2022.

“If I have seen further it is by standing on the shoulders of Giants”.

With this quote from Bernard de Chartres (and Isaac Newton), Kees received the gold medal from the Dutch Society for Surgery in January 2022. This award was awarded to Kees because of the special significance and influence he has had, both nationally and internationally, for the development of Dutch surgery.

Kees was an excellent clinician and scientist who pioneered the setting of hepatobiliary surgery in Maastricht and far beyond. But above all he was an exceptionally warm person, a hospitable Burgundian, a Francophile with his own vineyard. Someone who had immense wisdom and was a very committed mentor to his PhD students whom he provided with fatherly advice.

With the passing of Kees Dejong we lose a very special person, an excellent colleague, an example for us all.